Categories: Exhibition, News
How to organize a pop-up exhibition at a PC-bang (피시방):
Featured games range from classic video-games to serious games and interactive storytelling: 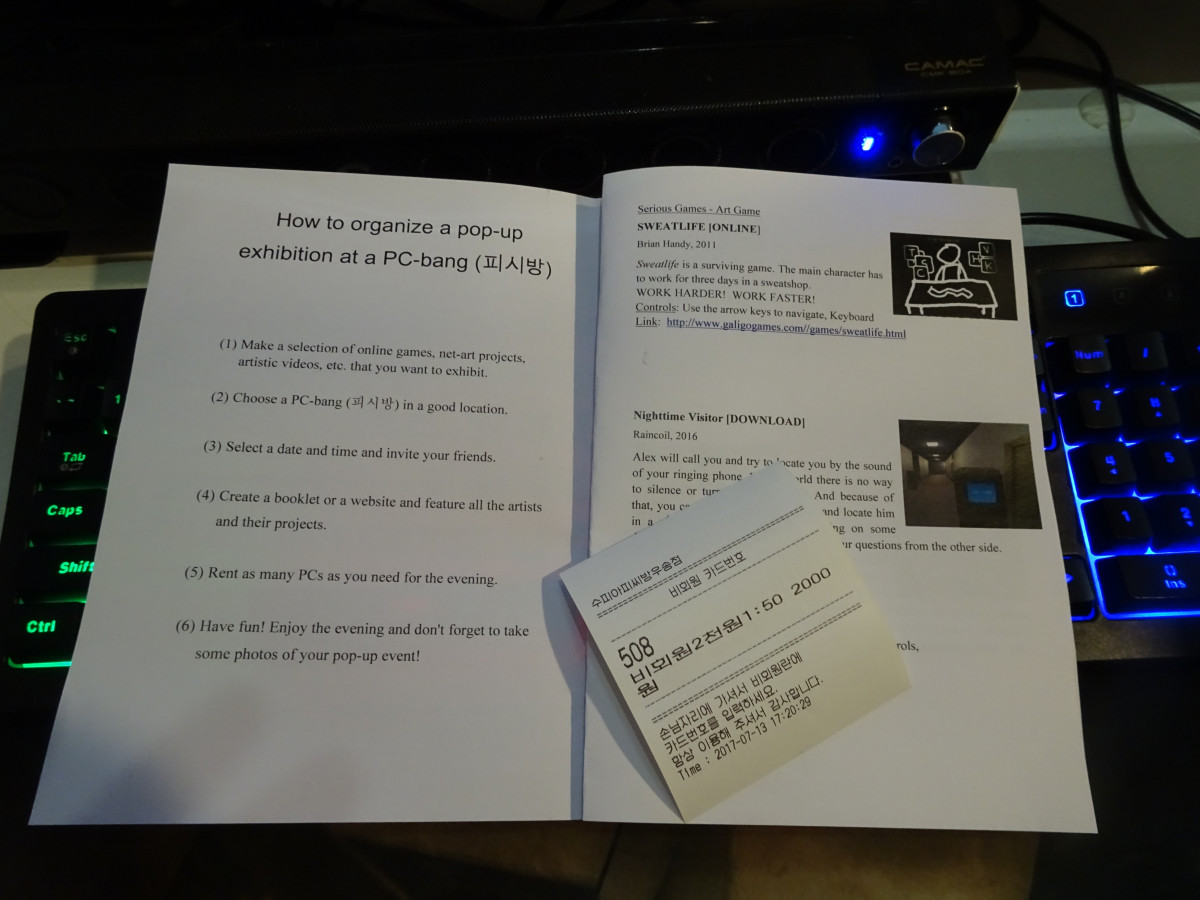 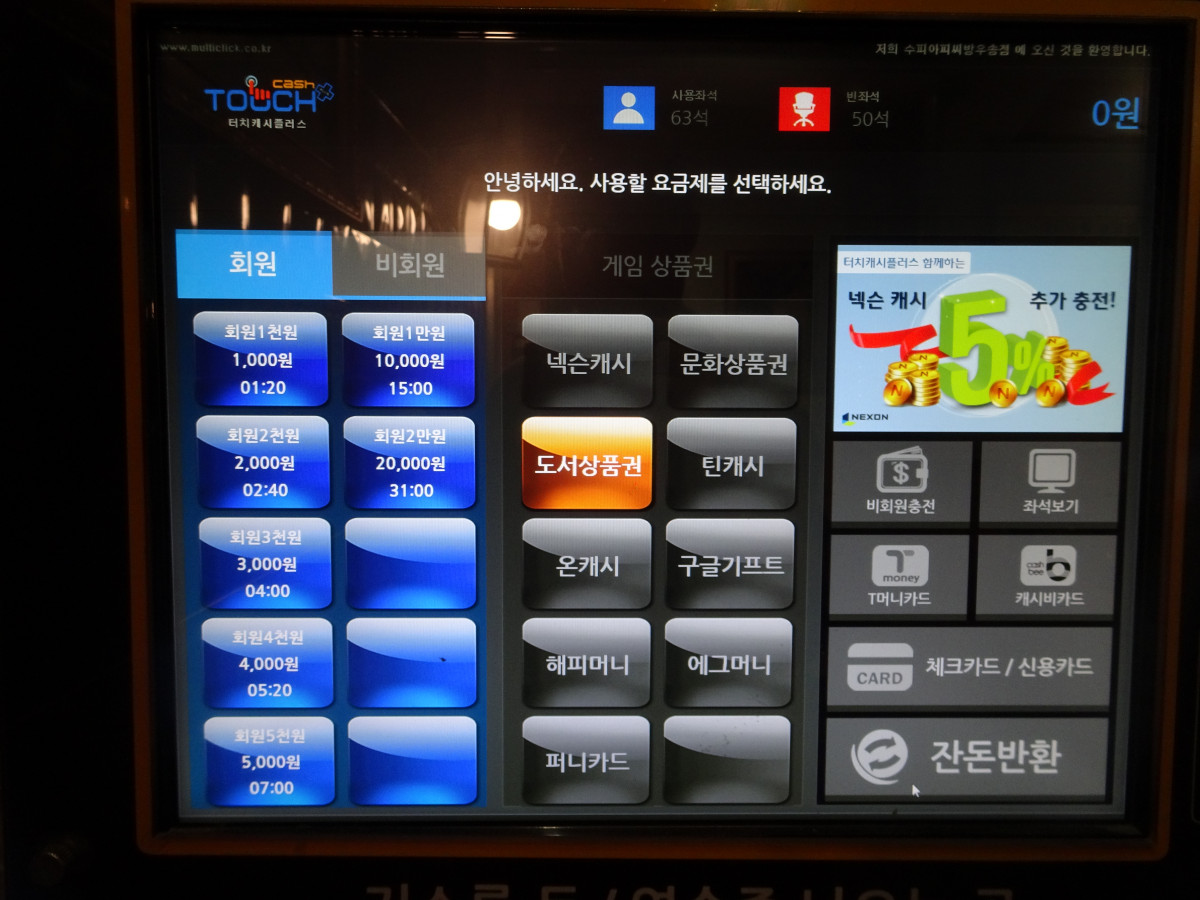 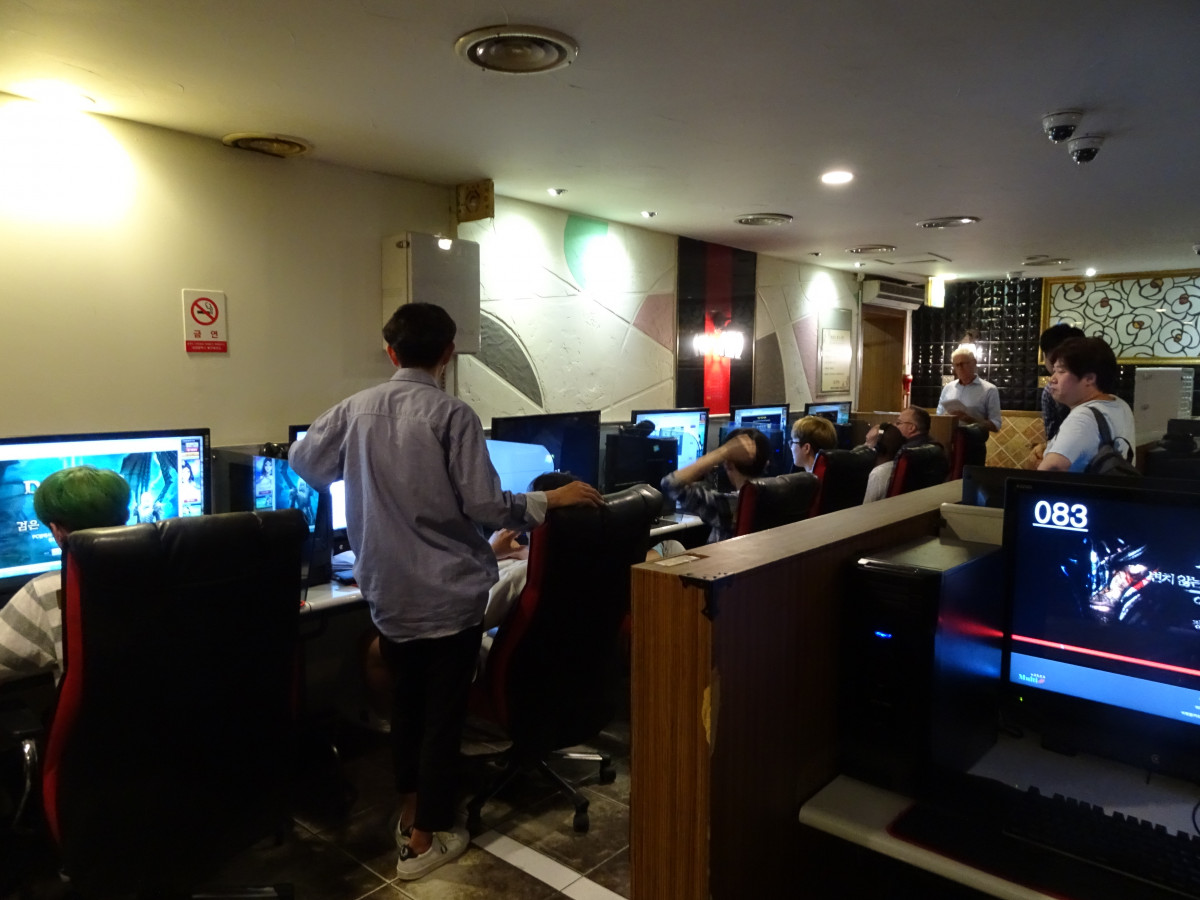 Get a free PC, check the printed program and the website for the links to the games 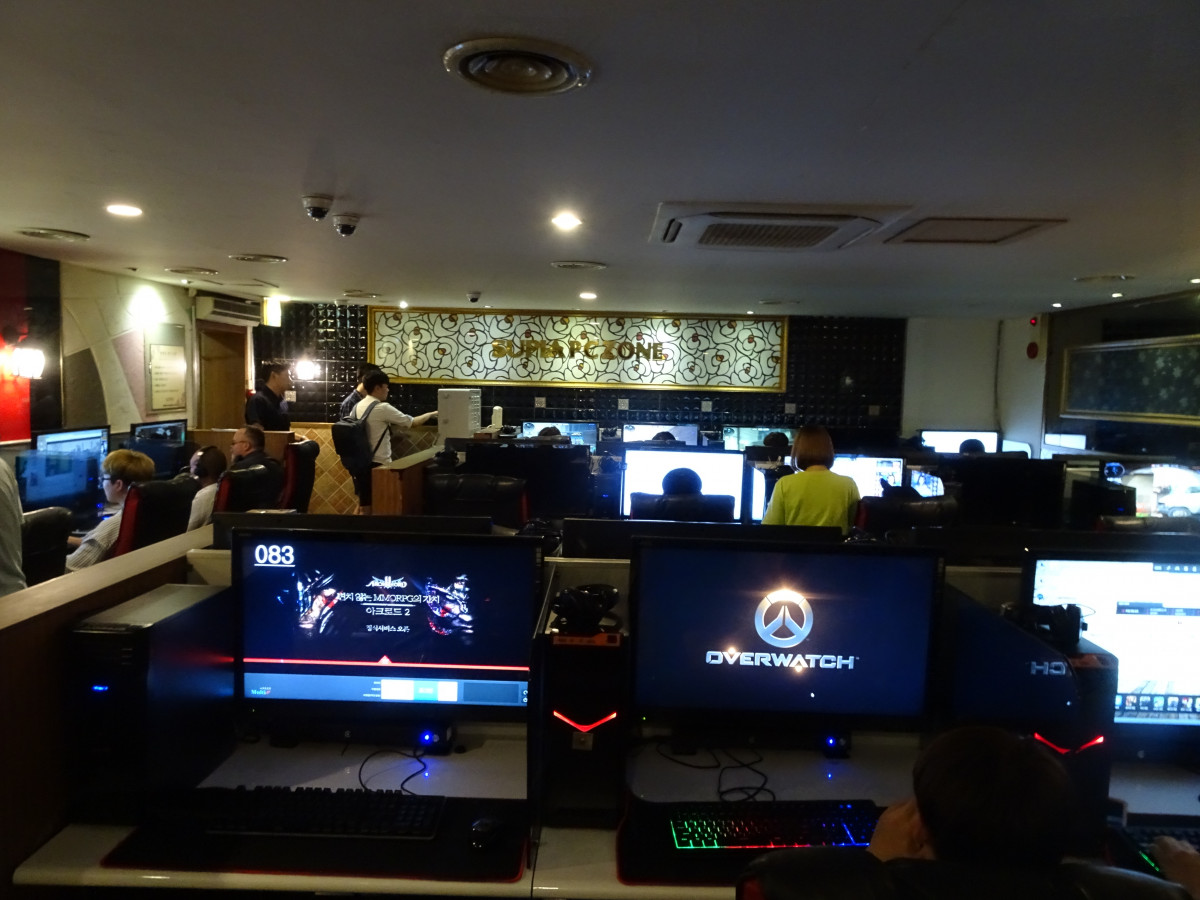 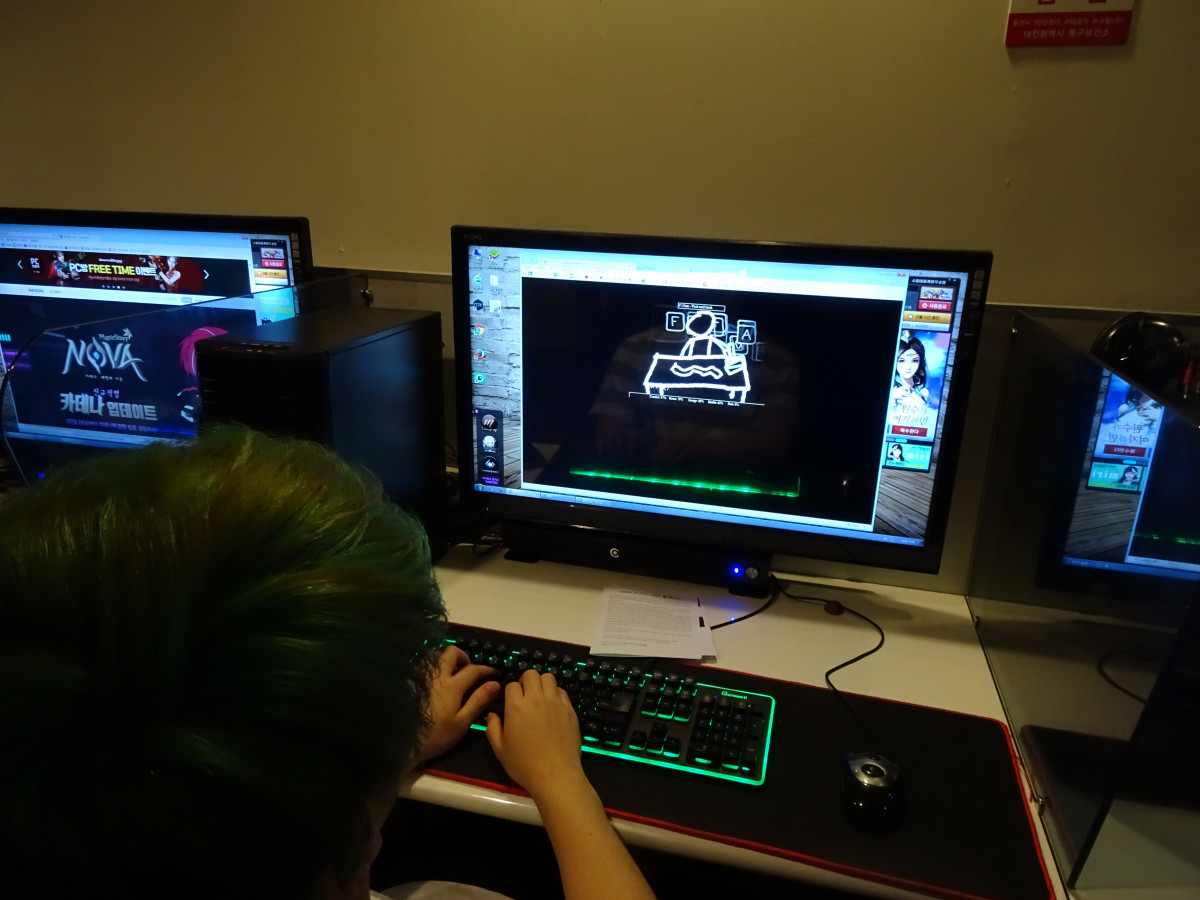 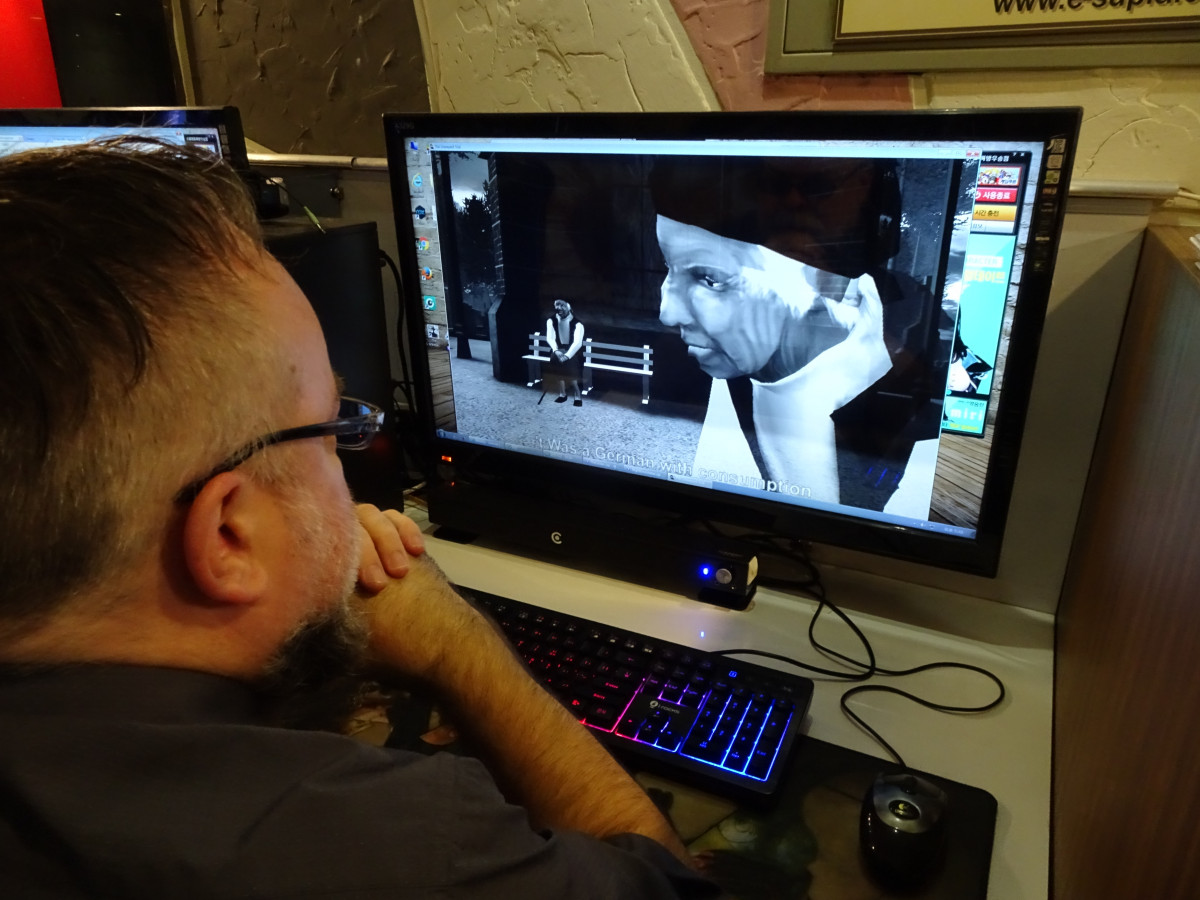 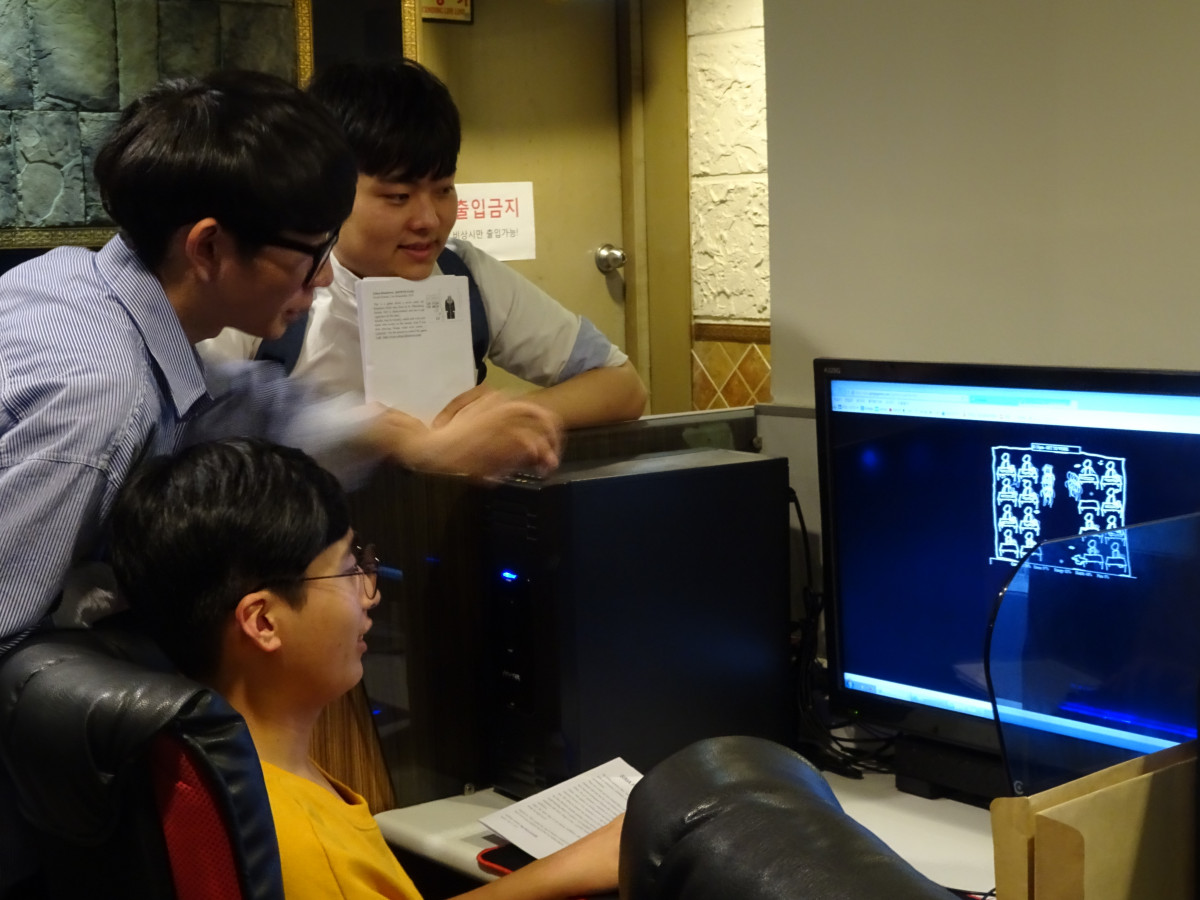 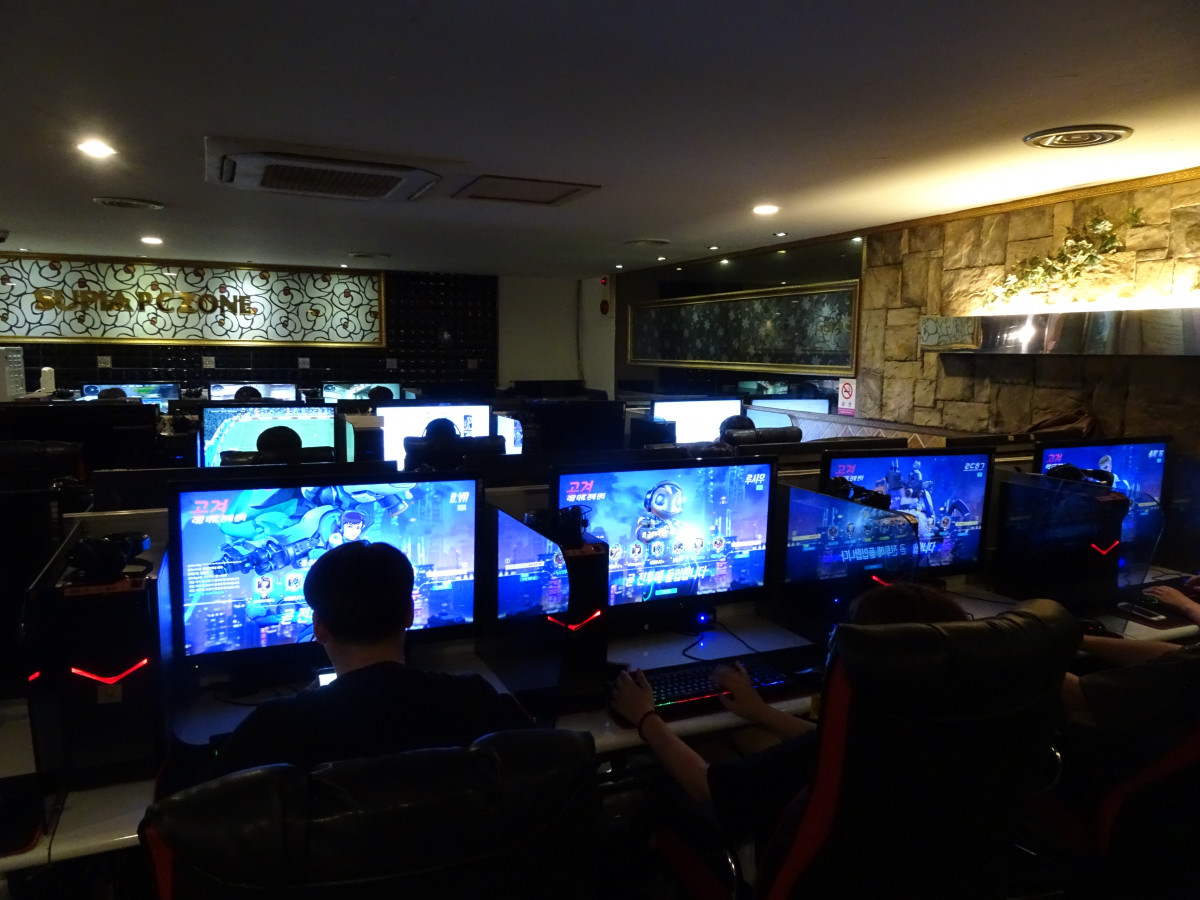 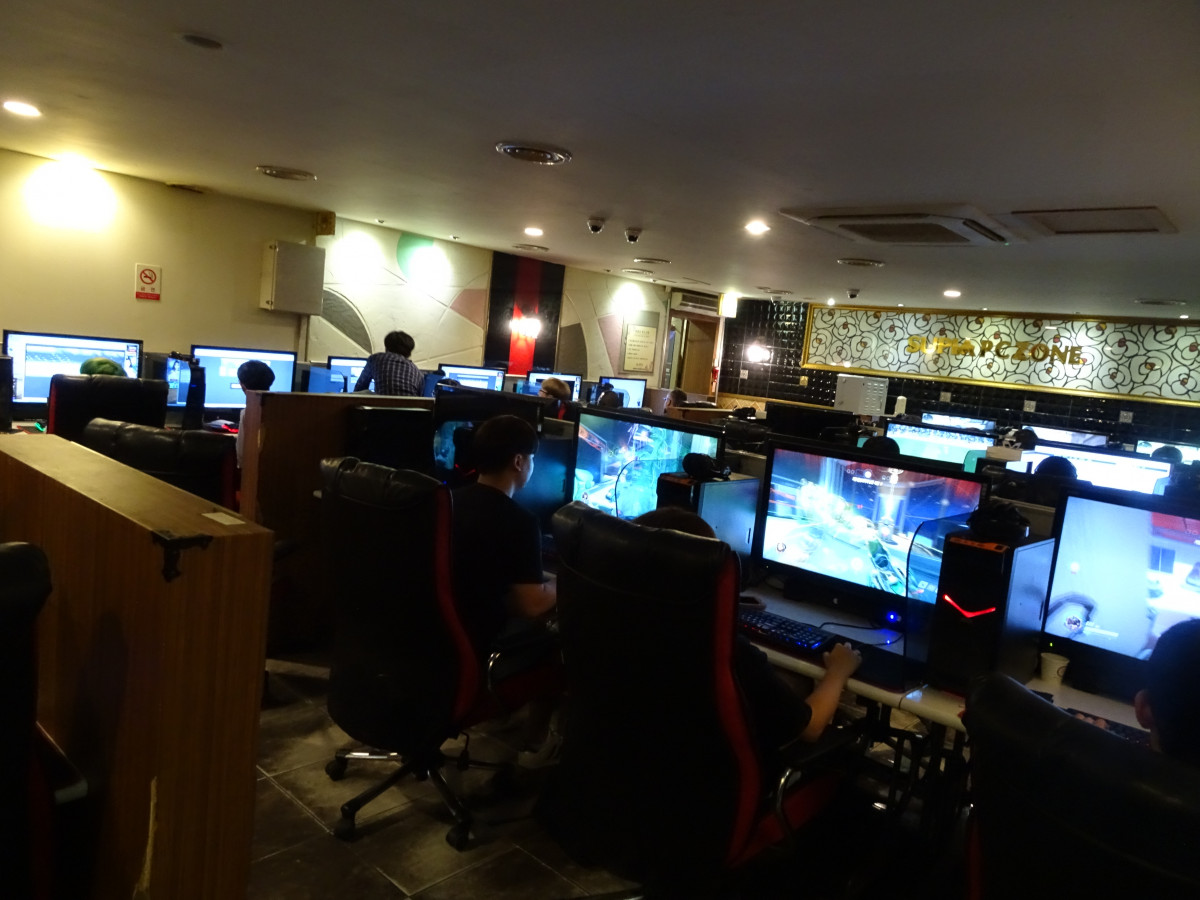 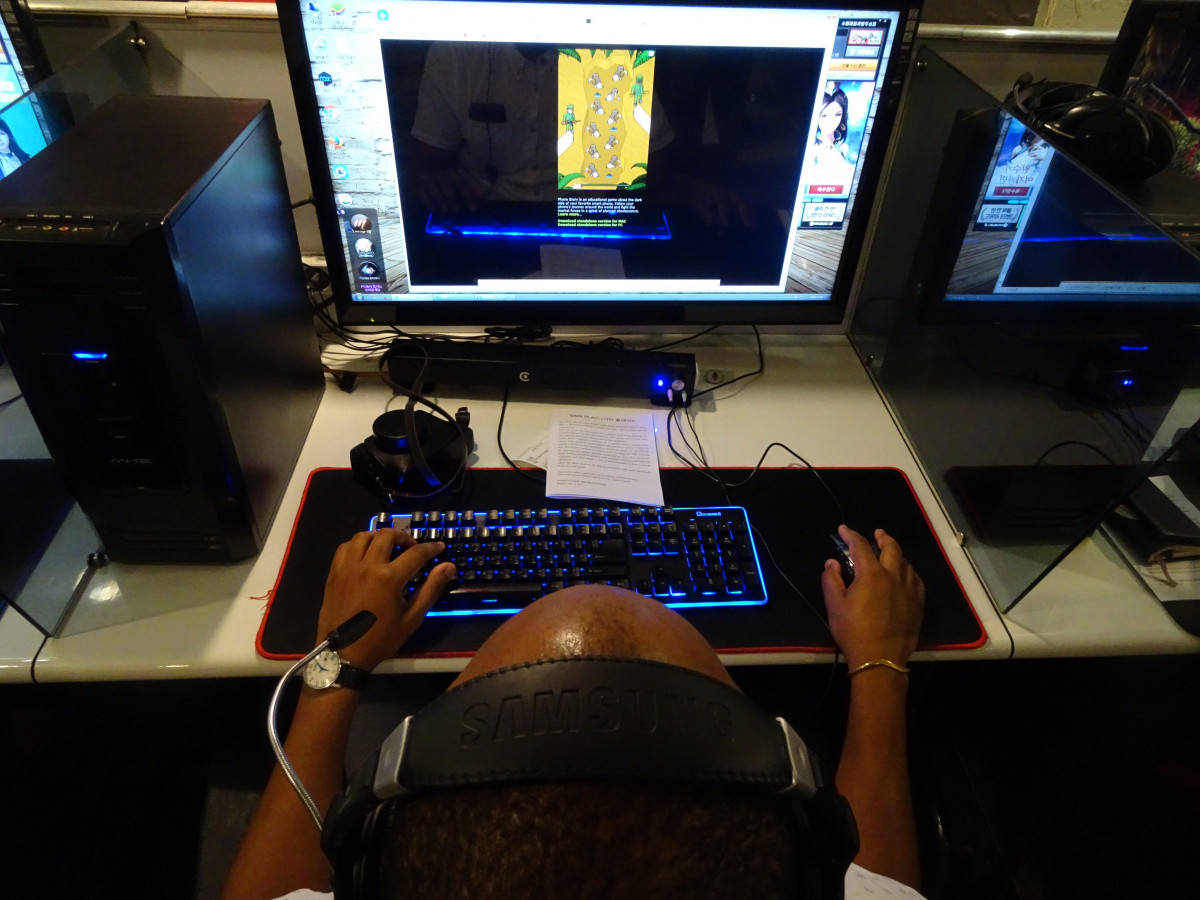 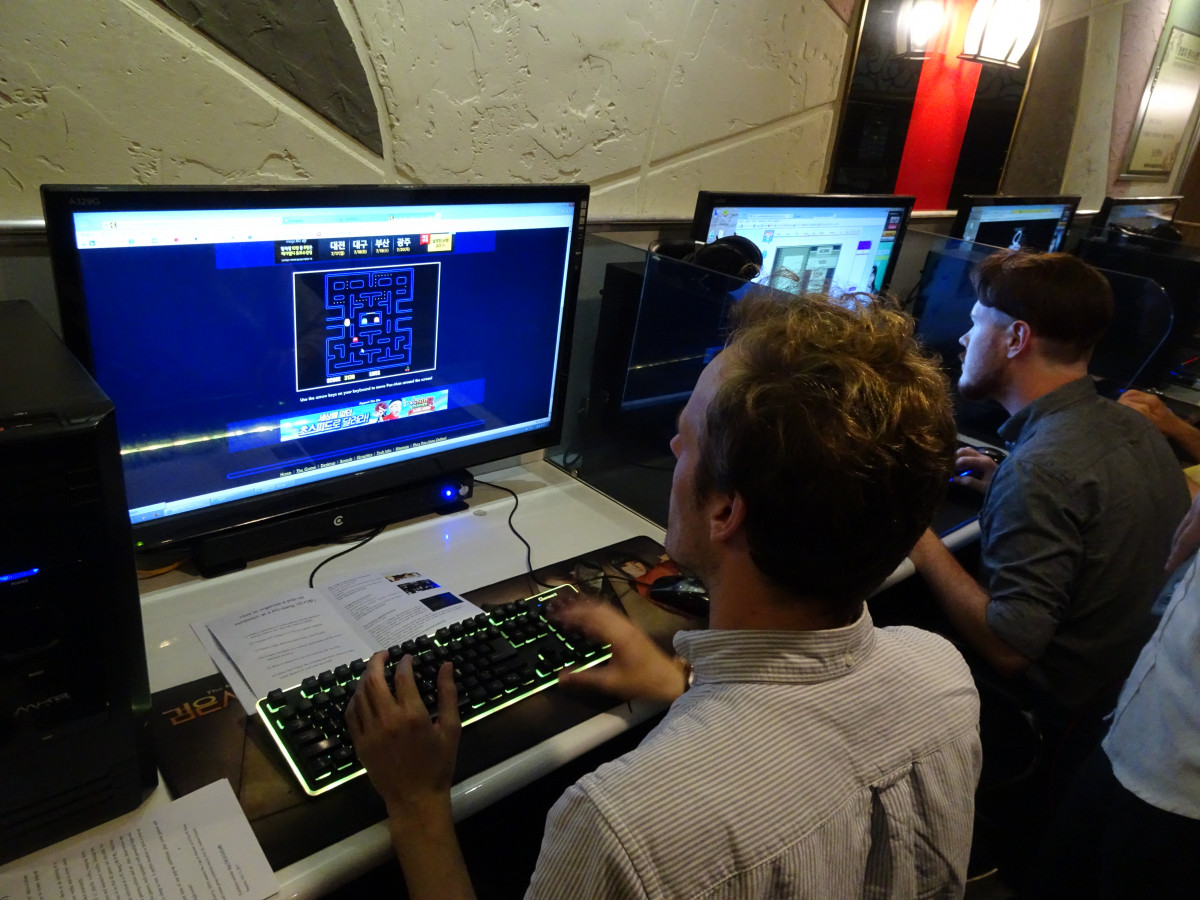 Classic games like Pac-man and Tetris were also played

The Garden [DOWNLOAD]
Elizabeth Goins, 2015
The Garden is a digital interpretation of the ca. 1500 triptych. The Garden of Earthly Delights, by Hieronymus Bosch. The concept behind The Garden was not to simply recreate the painting in a virtual world. Instead, we set out to build a game that could act as a bridge connecting players to the time and culture in which the work was created. The game play and the visual style of the world were designed to express major themes of the painting.
Controls: mouse and arrow keys
http://magic.rit.edu/projects/mgti/TheGarden.zip
Ulitsa-Dimitrova  [DOWNLOAD]
Gerald Delmas, Lea Schonfelder, 2010
This is a game about a seven years old homeless child who lives in St. Petersburg, Russia. He’s a chainsmoker and has to get cigarettes all the time.  Smoke, beg for money, snitch and visit your mom who works on the streets. And if you stop playing, things come even worse …
Controls: Use the mouse to control the game
http://www.ulitsa-dimitrova.com/
SWEATLIFE [ONLINE]
Brian Handy, 2011
Sweatlife is a surviving game. The main character has to survive three working days in a sweatshop.
Controls: Use the arrow keys to navigate, Keybord
http://www.galigogames.com//games/sweatlife.html
Tetris [ONLINE]
Alexey Pajitnov, 1984
Tetris is a tile-matching puzzle video game, originally designed and programmed by Russian game designer Alexey Pajitnov in 1984. The game (or one of its many variants) is available for nearly every video game console and computer operating system, as well as on devices such as graphing calculators, mobile phones, portable media players, PDAs, Network music players and even as an Easter egg on non-media products like oscilloscopes.
Controls: Use the arrow keys to navigate
http://www.tetrisfriends.com/games/Mono/game.php
The graveyard [DOWNLOAD]
Tale of Tales, 2008
The Graveyard is a computer art game developed by Belgian developer Tale of Tales (2008) in which the player assumes the role of an elderly woman walking through a graveyard to a bench. The game ends either with the woman leaving the graveyard or dying of natural causes.
Controls: Use the arrow keys to navigate
http://tale-of-tales.com/TheGraveyard/
Phonestory [ONLINE]
Michael Pineschi and Paolo Pedercini, Molleindustria, 2011
Phone Story is a satirical mobile video game conceived by Yes Lab activist Michael Pineschi and designed by Paolo Pedercini for Molleindustria with the stated aim of demonstrating what the developers refer to as “the dark side of your favorite smart phone.” The game consists of four minigames which require the player to complete activities such as forcing children in the Third World to mine coltan and preventing suicides at a Foxconn factory. The creators of the game stated the main purpose was to elicit a response from people who “fail to realize how their fashionable consumption can have negative effects on people in the globalized world.
Controls: Use the mouse to control the game
http://www.phonestory.org/
Canabalt [ONLINE]:
Adam Saltsman, 2009
Canabalt is a 2009 side-scrolling endless runner video game designed by Adam Saltsman for the Experimental Gameplay Project. It has been released on iOS, Commodore 64, PlayStation Portable, Android, Ouya and various Flash based online gaming websites, such as Kongregate.
Controls: Use the SPACE-bar to jump
http://adamatomic.com/canabalt
Pacman [ONLINE]
NAMCO, 1980
Pac-Man is a Japanese arcade game released in 1980 by Namco and published in North America by Midway. Bandai Namco have released numerous sequels and spin-offs, many of which have also been remade on multiple platforms, including home consoles and handheld devices. The first sequels were primarily released in arcades, while later titles were released on video game consoles.
Controls: Use the arrow-keys to navigate Pac-man
Link: http://www.classicgaming.cc/classics/pac-man/play-pac-man
Nighttime Visitor [DOWNLOAD]
Raincoil, 2016
Alex will call you and try to locate you by the sound of your ringing phone. In this world there is no way to silence or turn one’s phone off. And because of that, you can call Alex as well, to try and locate him in a similar manner. Also, try knocking on some doors. Maybe you’ll hear the answers to your questions from the other side.
Controls:
Tab – Get phone out / Put phone away
Q – Call / Answer phone
E – Hang up / Ignore call
Left Click – Interact / Knock on door
Esc – Pause menu from which you can view the controls, exit the game or change the options
Website Link: https://raincoil.itch.io/nighttime-visitor
Durations [ONLINE]
Pippin Barr, 2014
Are we there yet?! Are we there yet?! How long is this game anyway?! Develop an intimate relationship with time! Take a second! Take forever! Yes! It really does take as long as it says! Durations was made as part of a collaboration with Marina Abramovic and MAI. It was written in Haxe, using the HaxeFlixel library. Sound effects were made in bfxr.
Controls: Use the arrow keys to navigate
http://www.pippinbarr.com/games/durations/

In case you need a reminder, we all perform invisible labor on this platform. Here’s a print accompanying a larger installation that identifies some of those practices