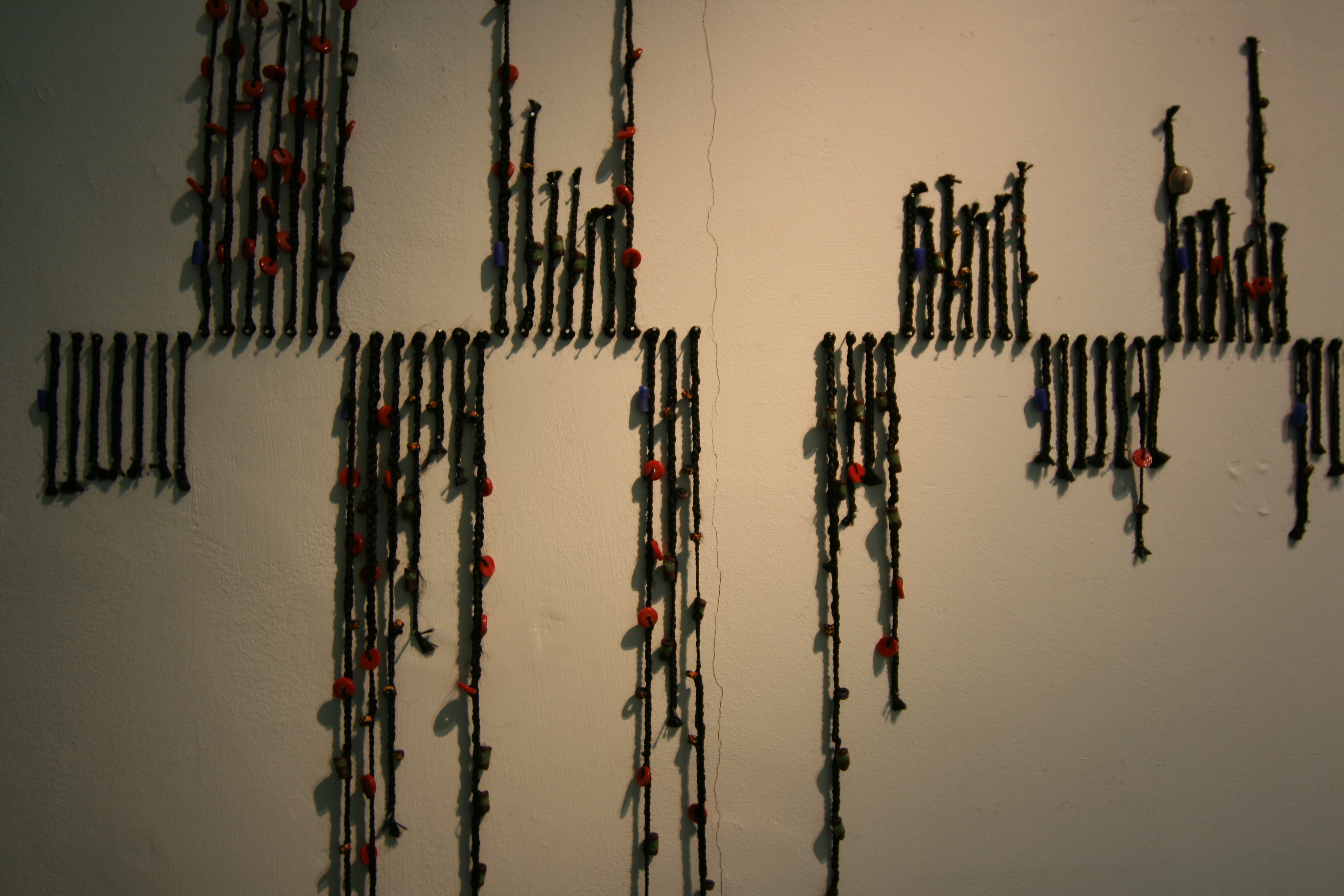 The artwork is a visualization of 274 e-mail replies that an internet scammer received during a period of 3 months (92 days). The scammer impersonates an U.S. diplomat currently based in Benin, West Africa who seeks assistance to transport a trunk box of money out of Benin and to the United States. People who would help him in this confidential mission would receive a share of the secured money. Each replied email was analyzed and categorized under the following topics: insulting e-mails, trusted replies, paid money or other including auto-replies. In the installation each braid stands for one day, the ones with no stone represent days where no emails were received. Each colored stone symbolizes one e-mail and refers to the categories following the mapping below;

red that stands for fire, blood, anger and aggressiveness is used for the insulting replies,

yellow stones that stands for gold and richness are used to symbolize when the victims confirmed a money transaction to the scammer,

black stones with yellow dots as a potential to gain money are used for the e-mails where the scammers story is believed and trusted.

The neutral green and brown stones are used for other e-mails including auto-replies, indicating that the scammer was actively sending out his business proposals.

After monitoring the inbox for fraudulent activities the potential victims who trusted the scammers business proposals were warned and advised to discontinue the communication with the scammer. Over time the scammer stopped using the account.

The visualization is inspired by various traditional methods that use braided wool, cloth or hair with interwoven stones or knots. Some examples of this includes Native American tribes who used wool as a timeline with attached colored materials to document personal events. The Inka culture created an own binary language by knotting string devices called ‘quipu’ to record both statistical and narrative information. In this artwork traditional West African hairstyle-braiding techniques combined with traditional pebbles are used to contextualize it with the story world of the scammer. The artwork was created in cooperation with local craftswomen during an Artist in Residence program at NKA Foundation in Kumasi, Ghana in August 2014.

why are so many universities paying licenses to Zoom /Adobe Cloud / outsource their email to MS365/Gmail? Support more open source projects!

This is what I mean when I talk about the importance of academy-owned infrastructure. https://twitter.com/BiellaColeman/status/1320088068041355270

The EU has had it with Big Tech and is ready to take action. Read our analysis of their (leaked) enforcement plans. https://www.eff.org/deeplinks/2020/10/eu-vs-big-tech-leaked-enforcement-plans-and-dutch-french-counterproposal